5 Influencer Marketing Mistakes And How To Avoid Them

In this article, Shane Barker shows reveals 5 influencer marketing mistakes that you shouldn’t wast you time or money on. He gives some examples and also advice on how to avoid them. It is another in our “Great Articles You may have missed” series.

In this post, you’re going to learn about the top five money-wasting influencer marketing mistakes, and how to avoid them.

#1: Not Defining a Goal for Your Influencer Marketing Campaign

Not defining a goal for your campaign could also prevent you from carrying out other steps of the campaign effectively. For example, you may not know what kind of influencers to look for. And you may not have any idea what kind of campaign you should execute.

So you’ll be wasting money on ineffective campaigns with influencers who aren’t right for your brand.

Define what success looks like to you. What do you expect from the campaign? Do you want more people to learn about your brand? Or do you want to make more sales through the campaign? Once you have a clear idea of the goals you wish to achieve from the influencer marketing campaign, you can define your key performance indicators (KPIs).

For someone who wants to drive brand awareness, the most important KPIs would be reach, traffic, engagement, etc. And for those of you who wish to drive more conversions, the engagement and conversion rates would be the top KPIs to measure your performance against.

Here are some ideas from TapInfluence about which performance indicators you should measure according your goals.

The right compensation model can get you a long way with your influencer marketing campaign. But choosing one that doesn’t fit your budget or goals could result in huge losses. And in some cases, you may end up paying for something that you could have gotten in exchange for a free product or experience.

Other times, brands may pay a set amount per post but fail to see sufficient returns on their investment. Or they may even agree to pay per click but end up paying much more than they budgeted for because the influencer drove better results than expected.

A TapInfluence and Altimeter study found that the biggest influencer marketing mistake is when brands don’t offer sufficient compensation. So marketers face a challenge with determining what type, and amount of compensation they should provide to influencers.

In cases where you’re offering exclusive previews of products and luxury experiences, you may not necessarily need to offer monetary compensation. But be open to negotiations if some influencers get back to you with additional requests.

Then you’ll have to choose a compensation model depending on your goals, and the types of influencers you’re going to work with.

Here are some of the most common influencer marketing campaign compensation models:

The Most Effective Method…

According to the Linqia study, the cost per engagement model is the most effective, along with the cost per click. This is likely because you’re paying for results. But the pay per post, and free products or experiences are also quite effective as you can see in the screenshot below.

It’s important to note that one single compensation model may not work for every influencer marketing campaign, or every influencer for the matter. You can try experimenting with some of the most effective ones to see which of them work best for your brand.

#3: Being Enticed by Audience Size Alone

This is easily the biggest mistake marketers make with their influencer marketing campaign. They think that just because an influencer has a massive following, they’ll have the maximum impact.

Of course this may be true in cases where the brand wants to drive awareness for their products. But the receiving audience may not be so attentive to the promotion if they’re not interested in the products.

Just imagine celebrity influencers like the Kardashian and Jenner siblings promoting a gaming product. They may be able to find a few interested individuals among their followers.

But from what we can see, a majority of their audience would be more interested in fashion, makeup and beauty, or even fitness. So gaming products may not necessarily be the best fit for these particular influencers. 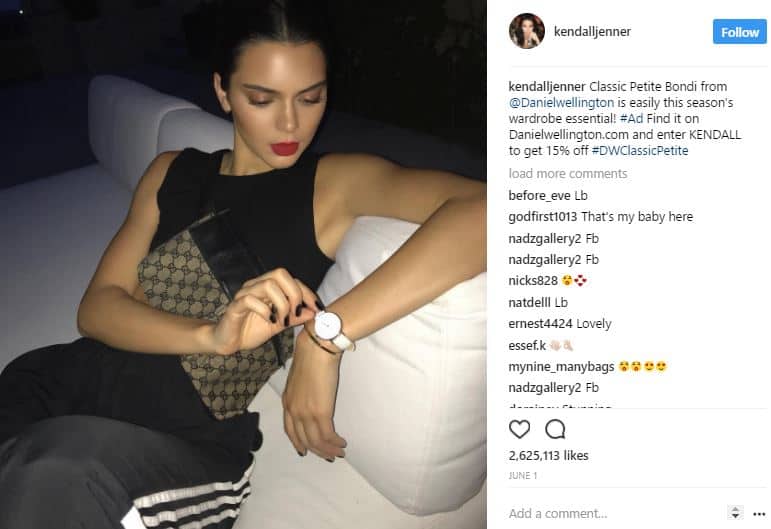 Kendall Jenner promoting Daniel Wellington watches is perfectly appropriate considering the type of audience she has.

When you’re looking for influencers to work with, your first focus should be on relevance as opposed to following size. Look for influential individuals in your industry or a related industry. And only then consider the size of their audience, if reach is your main objective.

Ideally, you should also look at engagement rate before you even start filtering your results based on the number of followers an influencer has. You should avoid partnering with influencers who have a massive audience, but who drive minimal engagement. This could either be because they bought those followers, or because the influencer isn’t capable of producing engaging content. 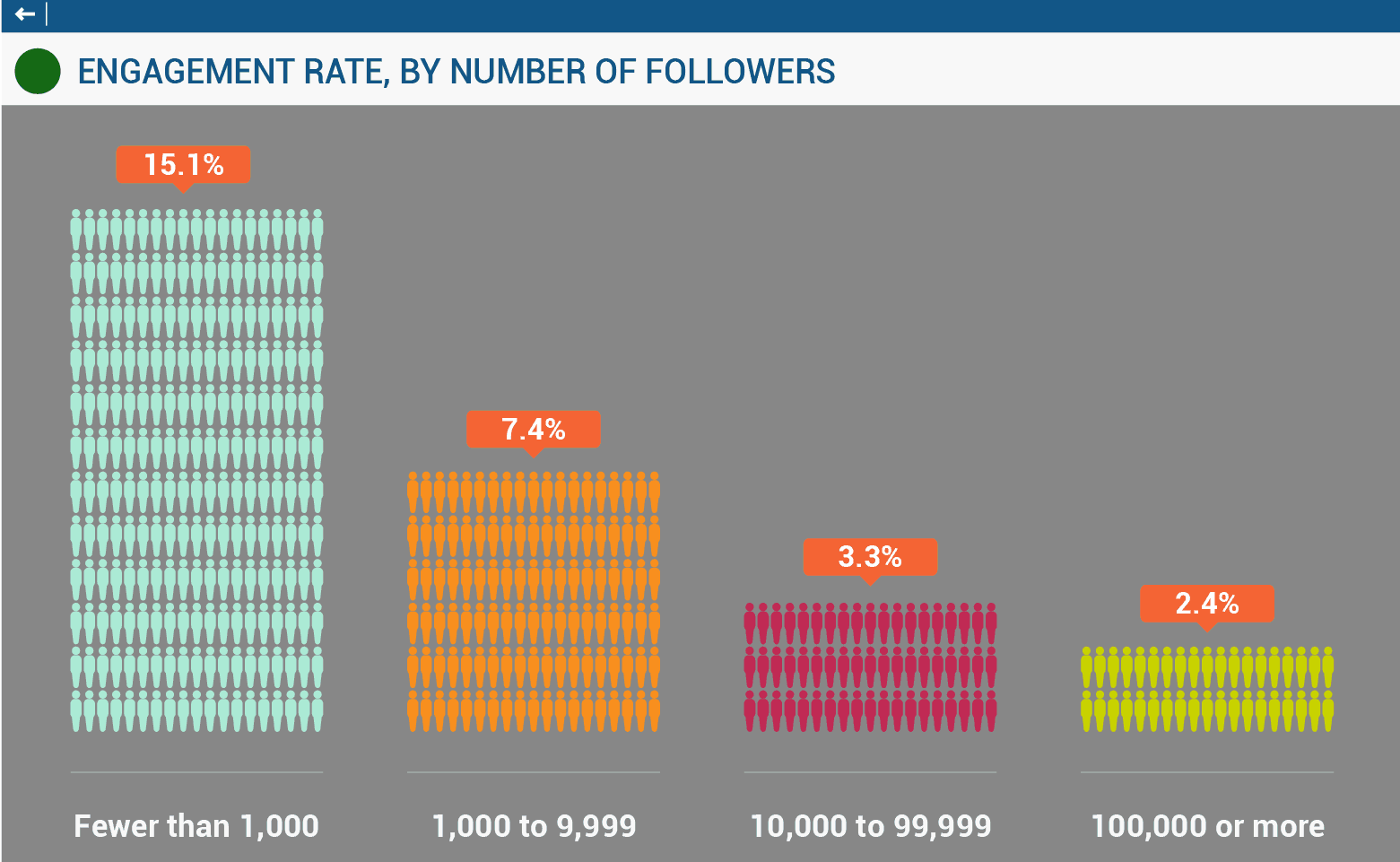 If engagement is your main priority, you can try working with micro-influencers. Based on the Influence.co chart, those with 1,000-9,999 followers seem to be most ideal since they still have high engagement rates, of around 7.4%. And their audience size is still large enough to make an impact.

A Scrunch case study highlighted how HP Australia partnered with micro-influencers, and mid-tier influencers relevant to fashion and style. Although they were promoting a gadget, the goal of the campaign was to drive awareness for the new HP Spectre, which boasts of a stylish design.

20 influencers created 41 Instagram posts, which reached almost a million people. The influencers managed to drive 62,943 direct engagements with the brand through their content.

Here’s an example of a post created by one of the influencers for the campaign, Madeleine Borgersen of The Daily Mark. 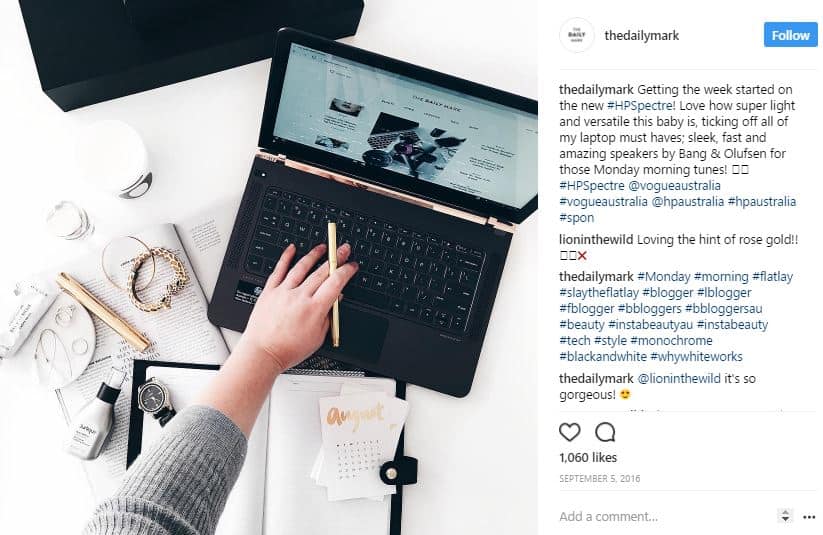 What worked so well for this influencer marketing campaign is that the brand partnered with influencers who were right for their campaign goals, and their target audience. Since they wanted to target a younger, more fashion-savvy audience; their choice of fashion and style influencers was perfect for the campaign.

You may have seen celebrities or influencers promoting a product and listing it’s features and benefits. And in many cases, the way they mentioned the benefits may seem a bit off – like it was overly scripted and unnatural.

That’s what happens when a brand is too controlling over what the influencers post about their brand. They provide influencers with a script they want them to follow, and expect them not to make any changes.

The most famous example of this mistake is Scott Disick’s influencer marketing fail. He copy-pasted a message from a Bootea rep in a sponsored post.

It seems he still hasn’t perfected the art of influencer marketing. As you can seen in the screenshot below, one of Scott’s latest posts still seems impersonal and unoriginal.

Although Scott did disclose the partnership in the above post, he could use some help creating more engaging content.

Some brands even tell influencers exactly what kind of content to create. And this may result in content that doesn’t seem like it was created by the influencer. Your target audience will instantly see through this. They may even fail to trust your brand because the content seems too promotional.

This would defeat the whole purpose of working with influencers. Influencers earned their influence because they’re excellent content creators (usually). And they know how to create content to engage their audience.

But when you restrict their creativity, they may create poor-quality content that seems unauthentic and forced. So your investment will be wasted.

You could ruin your relationship with the influencer, and they may refuse to work with you again. According to the TapInfluence and Altimeter study cited earlier, influencers felt that the second biggest mistake brands make with influencer marketing is being too restrictive with their content guidelines.

And a Julius study also found that at least 63% of influencers won’t work with brands for a second time if the brand is too restrictive with content creation.

So you’ll not only waste your marketing dollars, but also lose out on a chance at partnering with those influencers for your next influencer marketing campaign.

The only way to avoid making this mistake is to provide influencers with creative freedom. Give them some basic guidelines, such as the kind of tone and language you expect, and how you want to portray your brand or product. And then leave it up to them to come up with something entirely original.

For example, Airbnb promoted some of their listings by providing accommodation to some influencers. An excellent example is how they promoted their listings through The Endless Adventure, an influential YouTube channel run by a traveler couple. 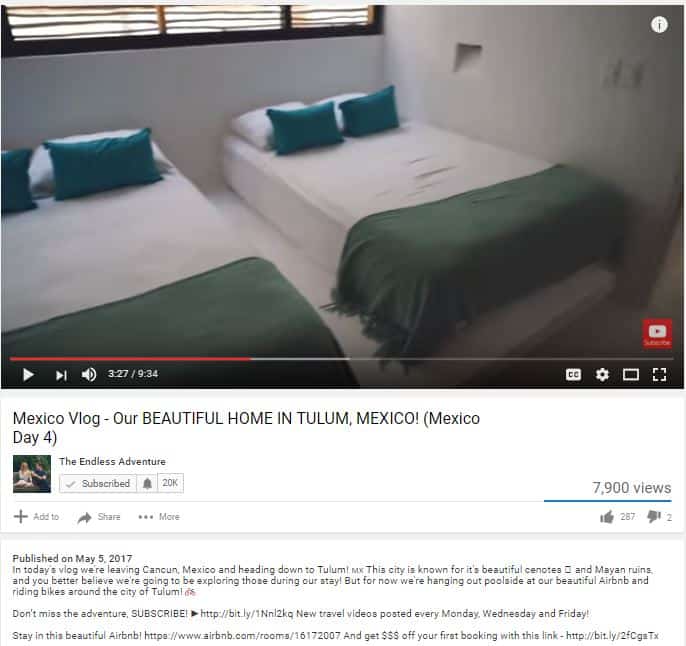 Their video wasn’t entirely about the house. It was in-tune with their usual travel videos, and maintained a casual vibe, which gave it an authentic feel.

What these marketers and brands don’t realize is that they could be violating FTC guidelines when the influencers they work with fail to disclose their brand partnerships. And this mistake is far more common than you think.

According to Mediakix, more than 90% of endorsements by top social media celebrities fail to comply with the FTC guidelines.

The Lord & Taylor fiasco is one of the more recent and widely-known FTC violation cases when it comes to influencer marketing. The clothing brand received heat from the FTC after 50 influencers created sponsored posts without disclosing the partnership. 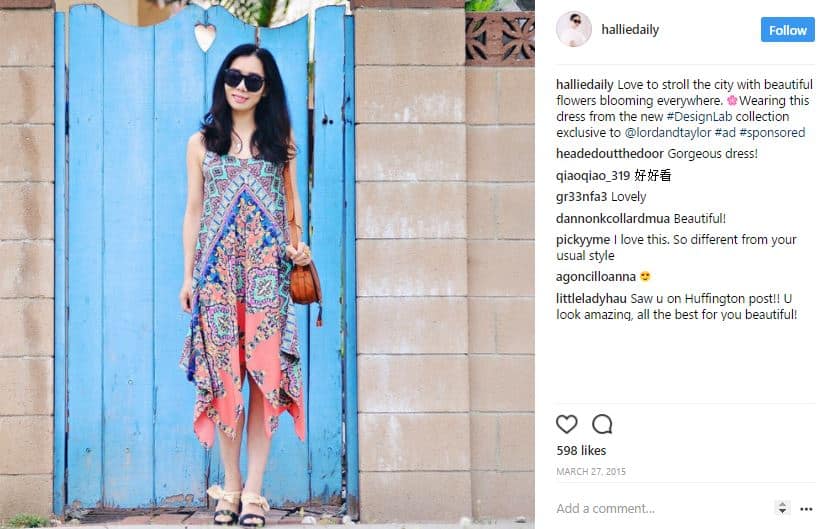 If you’re among the brands that violate these guidelines, you could end up paying huge fines. This means you’ll lose a lot of money on top of the basic expenses of your influencer marketing campaign.

You need to keep up with the changes in influencer marketing guidelines created by the FTC. You can check out the full list of rules on their official website.

Here are some of the basics you need to remember:

Brands and retailers are starting to be more careful in complying with FTC guidelines when launching an influencer marketing campaign.

Take for example how the Nordstrom influencer in the following screenshot took care to tag her photo with #ad. 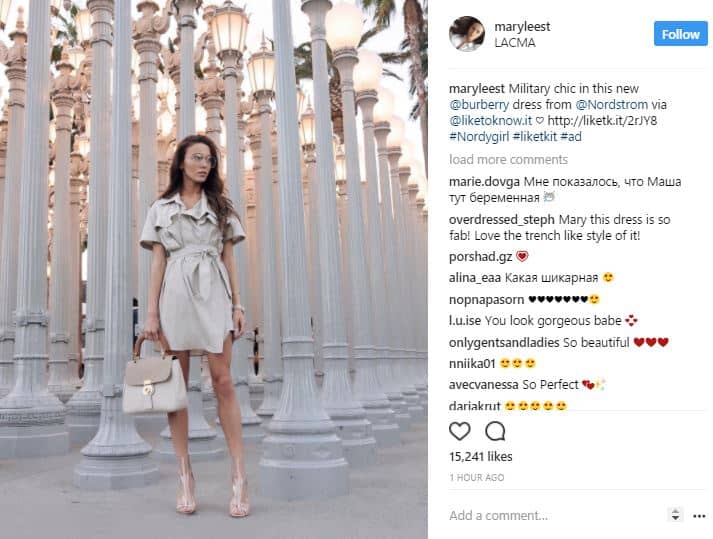 These are the top five money-wasting mistakes you should avoid when launching an influencer marketing campaign. You need to carefully define your goal, and have an appropriate compensation model for your campaign. You should also maintain transparency, and ensure influencers create authentic, and engaging content for your brand.

Have you or a brand you know ever committed these mistakes before? Let me know in the comments below.

This article previously appeared on shanebarker.com, under the title “5 Influencer Marketing Mistakes You Shouldn’t Waste Your Money On“. It is republished here with permission.
Featured Image: Copyright: ‘https://www.123rf.com/profile_convisum‘ / 123RF Stock Photo