This is the amazing story of how content marketing took one woman on a journey from being a Silicon Valley worker to the owner of a Michelin-rated restaurant.

The most surprising fact? How inexperienced she was as a chef.

She told SFGate.com… “I learned to cook when I first tasted what passed for Thai food here in the States. Before that, I couldn’t even boil an egg.”

A little later, I’ll reveal some lessons we can learn from her (and even how I think she tapped into the power of serialization in a subtle way).

But first, listen to her amazing story… 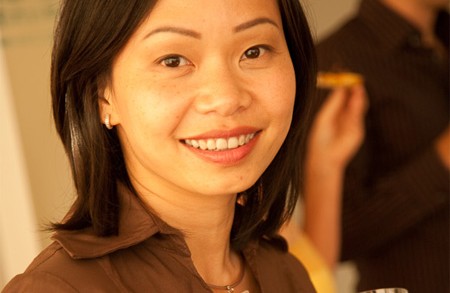 Pim Techamuanvivit grew up in Bangkok.

But, in her words, she was “shipped off to study in other places”. Her studies involved a large variety of things such as cognitive science, communications, and ethnomethodology.

She eventually found herself living in the San Francisco Bay Area. And you’re not going to believe this, but after all of the education she received, she discovered that her real passion was food.

That’s why in 2005 she took an unbelievable risk. She quit her Silicon Valley job to pursue a career in food.

But what kind of career in food can someone who is not a skilled chef have? She decided to start a food blog she called chezpim.com, where she would write about her visits to some of the world’s best restaurants.

So she began creating content: writing, reporting, and taking photos about her love: food.

On her blog she chronicled what she told FoodandWine.com was, “culinary adventures from street stalls around Southeast Asia to my longtime favorite Michelin three-star, L’Arpège in Paris.”

In was through this blog that she became one the early food bloggers to gain widespread praise for her blog. She ended up accumulating more than 142,000 regular readers who signed up for daily recipes, restaurant reviews and to hear her opinions on food.

One other surprising thing came from her blog: she met her longtime partner, David Kinch, who is the chef-owner of Manresa in Los Gatos. (It was through a comment on her blog that their relationship began.)

In 2009, Pim published her first (and I believe only) book The Foodie Handbook: The (Almost) Definitive Guide to Gastronomy.

You can see her trailer for the book here…

In the spring of 2014, Pim took a huge leap. She opened her own restaurant, Kin Khao in San Francisco, whose mission was in her words to “liberate” Thai cuisine from “the tyranny of peanut sauce.”

What was her inspiration?

She couldn’t find any good food like she ate in Bangkok.

That inspired her to begin learning the recipes for her favorite dishes by calling her relatives back home and on her annual trips back to Thailand.

This year, Kin Khao received the highest praise: a 1-star Michelin rating. (1 star: Very good food). This is the rating from the MICHELIN Guide:

Don’t let its covert location fool you-Kin Khao is a flagrantly delicious and very distinctive dining room. The décor is unexceptional by no uncertain terms, but really nobody seems to care, as the cooking-punctuated by Californian elements and welcome seasonality-is the real deal. Northern Thai is what this kitchen is all about and pad Thai-loving palates should vacate these premises…pronto. Of course, the unique menu reads like a veritable thesis on Isaan food mingled with California love. Then there’s the easygoing and chill staff who never miss a beat-as they bestow tables with vibrant, product-driven plates. These have included crispy lima beans tossed in nam tok followed by crunchy albeit not as “hot” chicken wings massaged with tamarind and chili. Pork meatballs seasoned with garlic and lemongrass (laab tod) are enriched by a phenomenal chili (jaew) sauce; while a gorgeous platter of crunchy vegetables is accompanied by a jar of the incredible nam prik (potent with shrimp paste) layered with caramelized pork jowl, fried catfish, and a salted duck egg. Panang curry with tender-braised duck is a champ among palates less valiant. Closing arguments may reveal that this is a truly Thai kitchen turning out insanely memorable food. All objections overruled.

Pim is obviously a naturally skilled chef. And I am sure her relationship with  David Kinch (whose restaurant also received a Michelin rating) didn’t hurt.

But you need to remember how this all began with content. It didn’t begin with cooking lessons. It began with her creating content based on what she loved.

There are many lessons we can learn from Pim, but here are four important content marketing lessons that I thought I’d point out:

And how did she use serialization and suspense?

I think she did this by constantly posting up new restaurants that she visited around the world. This made her audience want to come back to see the latest restaurant she had been to!

Pim’s story is a powerful example of content marketing.

Originally titled “From Never Boiling an Egg to Chef of Michelin Starred Restaurant: The Power of Content Marketing” and published on recessionsolution.com. It is republished here with permission